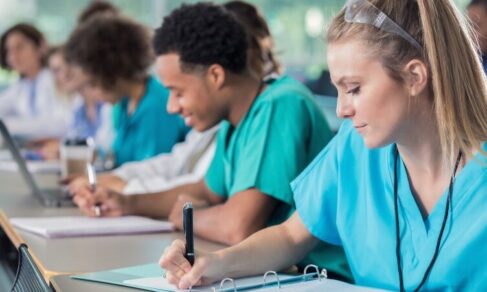 The number of Scottish student nurses and midwives accepted onto university courses in Scotland this year fell 700 below Government recruitment targets.

Data published by UCAS, the university admissions service, showed that of the 4,837 places funded for the year 2022-23, only 4,130 have been accepted.

RCN Scotland has said that this ‘would only add to the workforce crisis’ and that the impact of failing to fill the funded places ‘should not be underestimated’.

Scottish student nurses and midwives are funded by the Nursing and Midwifery Student Bursary Scheme (NMSB), administered in turn by the Student Awards Agency for Scotland (SAAS).

Unlike in England, where student nurses must pay their own tuition fees, residents of Scotland and EU nations may apply to have their tuition fees financed by MNSB as well as a yearly bursary of £10,000 for the first three years of the course.

‘The clearing process is ongoing and final numbers will not be known until the end of cycle in December.

‘However, it’s welcome that compared to 2019, today’s Ucas figures show there has been an increase of over 5% in the number of acceptances for nursing places and over 7% in midwifery places in Scotland.

‘For context the number of nursing acceptances in Wales are down by over 17% over the same period.’

Despite falling short of this year’s target, the Scottish Government said that the number of nurses and midwives had increased 5.8% since the beginning of the pandemic.

In line with trends across the country, NHS data shows that Scotland had  6,010 unfilled nursing and midwife roles in the NHS in June despite a 0.9% increase in staff over the last year.

Eileen McKenna, associate director for nursing, policy and professional practice said: ‘Congratulations to all of those who are embarking on their nursing journey.

‘However, today’s figures are extremely worrying. The impact of failing to fill the number of places on nursing and midwifery courses must not be underestimated. This will only add to the nursing workforce crisis.

‘The Scottish government must act now to ensure nursing is seen as an attractive and rewarding career. They need to ensure nursing students have adequate financial support to allow them to prioritise their education and cope with the rising cost of living.’