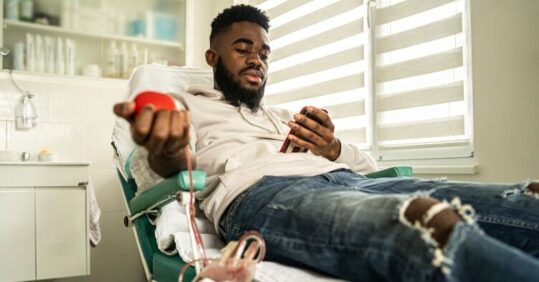 Health and social care secretary Steve Barclay has issued an urgent plea for more blood donors to come forward as supplies drop to almost half their target levels.

Mr Barclay, who took on the role of health secretary only this month, said that the NHS is running on three-and-a-half days of blood reserves while the health service normally aims to maintain a six day supply.

He promised there were still ‘plenty of supplies’ as he made his own blood donation at a hospital in Stratford, but NHS Blood and Transplant issued a pre-amber alert on 26 July. An amber alert would be triggered should supplies fall to a two-day stockpile.

Mr Barclay claimed that the recent supply shortage was due to the effects of Covid and ongoing staff shortages. There are currently around 40,000 nursing vacancies in the NHS, according to official figures, and the health and social care committee has found that government recruitment was having ‘no meaningful impact’ on the shortages.

Steve Barclay said that it was necessary to be ‘proactive’ in developing a larger stockpile as the summer holidays often lead to much greater demand.

‘Stocks of blood supplies are lower than we would like,’ said Mr Barclay, ‘we still have plenty of supply, but summer is a traditionally a time when donations are lower than they would be at other points of the year.’

Although around 80,000 people donated blood each year the NHS says that 1 million more donors are needed over the next five years with an especially need for black African, Black Caribbean and younger donors to come forward.