Nurse shortfall could hit 38,000 even if recruitment target reached 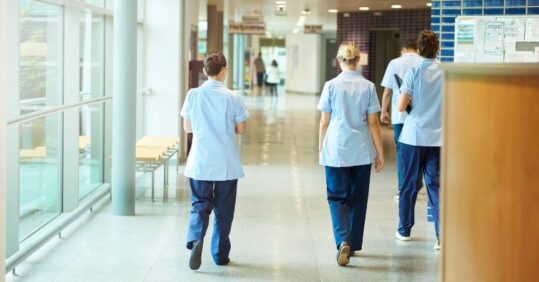 Healthcare services in England could face shortfalls of up to 38,000 nurses even if the Government makes good on its promise to recruit an extra 50,000 nurses, a new report has found.

The report, which was released by the Health Foundation’s REAL (research and economic analysis for the long term) centre, showed that increased recruiting may still leave England with an overall shortfall of 103,000 full-time equivalent employed health care professionals, including nurses, health visitors, and general practitioners.

This comes as the Government announced a pay rise of just under 4% for nurses on Agenda for Change contracts, which the RCN has described as a ‘grave misstep by ministers’. In May this year, the NMC’s annual report showed that the number of nurses leaving the register increased by 13% on the year before.

The report also found that of the approximately 100,000 vacancies across the NHS, around 40,000 of these were in nursing positions, despite nurses only making up a quarter of NHS staff.

Additionally, in a trend which the report described as ‘particularly concerning’, the share of vacancies made up by mental health nurses increased from 21% in 2018 to 29% in 2021, despite the significant increase in demand for mental health services driven by the pandemic.

The Government is currently on track to meeting it’s target of recruiting 50,000 extra nurses by March 2024. However, Anita Charlesworth, Director of Research and REAL Centre at the Health Foundation, said that ‘this relies heavily on sustaining historically high levels of international recruitment, very much a ‘quick fix’ and does not replace the need to train and retain more nurses in the UK.

‘The 50,000 target is arbitrary and not based on the number of nurses the NHS needs; nor does it ensure that nurses are recruited to the areas and types of care where the need is greatest.’

Ms Charlesworth also added that this will ‘still leave the NHS almost 40,000 short of what is needed’, making the NHS ‘unlikely to be able to deliver 2018/19 standards of health care’.

Under a pessimistic scenario, the report also found that there could be a shortfall of 140,600 full-time equivalent nurses by 2030/31.

RCN Director for England, Patricia Marquis, said that these figures ‘show the apocalyptic impact inactivity from ministers could have on the NHS in England – a potential shortfall of 140,000 nurses would be devastating for patient care. Now is the time for government to change course’.

She continued: ‘Ministers must heed the warnings in these projections and act decisively with a fully funded health and care workforce strategy. With this report on their desks, failure to act is a further betrayal of patient safety.’

With all eyes on the Conservative leadership race, there are mounting concerns that the next Prime Minister will inherit an NHS facing unsustainable work force shortages. While the report does show that the total number of nurses in England was up 3.7% on last year, this was not evenly spread across all areas.

Ms Charlesworth claimed: ‘If the new prime minister wants to rebuild the NHS and return it to pre-pandemic levels of care, they need to make nursing a more attractive career choice and put in place a robust, costed long-term plan to address workforce shortages, backed up by independent projections of how many staff will be needed.’

The Health Foundation research also highlights the growing disparity between the number of nurses in adult social care working in NHS hospitals, which has increased by 24% over the preceding decade, and roles such as health visitors who’s numbers have declined by around 21% over the same time.

Additionally. the number of nurses working in learning disability care have steadily declined since December 2011, accompanied by a 30% reduction in the number of school nurses.

‘Particularly concerning are the shortages of staff within certain healthcare specialties and areas. The NHS needs a realism reset from the Conservative leadership candidates. The new Prime Minister must face up to chronic staff shortages which are compromising patient care and jeopardising the ability of the NHS to make significant and sustained inroads into the elective care backlog.

‘NHS leaders want to see immediate and concrete commitments to expanding the NHS workforce to ensure there are enough staff to respond to the pressures of an ageing population and future Covid surges.’