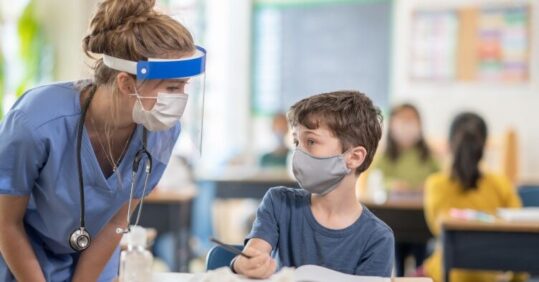 Rolling out preventative antibiotics in primary schools with cases of streptococcus A could leave child mental health and protection support without sufficient coverage, the head of the School and Public Health Nurses Association (SAPHNHA) has said.

The Government has said it is considering using antibiotics on a prophylactic basis in primary schools on a case-by-casis basis, such as for a group of children in a class or an entire school year group, after nine children have died from infections linked to strep A since September.

She said: ‘The plan would mean that capacity will be taken away from the other front line of mental health and children’s protection services. We’ve lost staff because they were given a taste of other careers during Covid and school nurses who are already exhausted haven’t come back. Of course, school nurses can do this, but we need to remember the other front line; you’re only robbing Peter to pay Paul…

She added: ‘There’s no slack. School nurses have been doing public health services for as long as they’ve been around but their visibility has gone up since Covid. We’ve been recognised in that role and demand on us has increased because people have been reminded of the skills of this specialised workforce. But you can’t have it both ways.’

However, Ms White said there has been ‘little communication’ from England’s chief nursing officer Ruth May or through other official routes over any potential rollout.  She added: ‘Whether we have the capacity is another question.’

Lord Markham, a Conservative peer, initially suggested the plans in the House of Lords on Monday. He said: ‘We have given instructions to doctors that where necessary they should be proactively prescribing penicillin as the best line of defence on this, and also where there is a spread in primary schools, which we know is the primary vector for this, whether they should be working with local health protection teams, and sometimes actually look at the use of antibiotics on a prophylactic basis.’

The idea was then further developed by schools minister Nick Gibb, who told GB news yesterday that the use of preventative antibiotics ‘may well be an option for those particular schools where there is an infection’.

The UK Health Security Agency (UKHSA) told Nursing in Practice that there are currently no plans for a blanket rollout, as the measure was described by The Guardian, but that health officials may decide to offer antibiotics to an entire class or year group to prevent further strep A infections.

UKHSA deputy director Dr Colin Brown, speaking on Sky News, said: ‘We have long-standing guidance on a case-by-case basis. Our health protection teams will assess the situation in a school or other settings and, depending on the situation, we would consider antibiotics for either a group of children in classes or an entire nursery school, for example.

‘The information we have at the moment is that there is nothing particularly new or novel. We are just seeing a larger number of infections than we would normally see at this time of year. We saw very little Strep A over a number of years, so with different mixing patterns and changes in susceptibility in children we’re probably bringing forward the normal scarlet fever season where we would see Strep A infections’

Additionally, Dr Brown cautioned parents: ‘Be alert about severe illness. Strep can cause throat infection and fever. Sometimes there is a red-looking tongue and some muscle aches. If your child is severely unwell and has lost urine output, if they are floppy, poorly responsive or has difficulty in breathing, we would encourage people to seek prompt medical attention.’