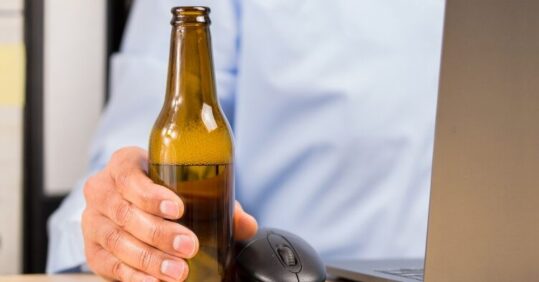 Health minister and registered nurse Maria Caulfield, who returned to nursing during Covid-19 pandemic, has refuted claims that nurses drank at work during lockdowns.

This comes after MP Michael Fabricant controversially suggested last week that nurses were ‘drinking in the staff room’ during Covid lockdowns when asked about Prime Minister Boris Johnson being fined for attending a birthday gathering in June 2020.

But Ms Caulfield said on Twitter on Thursday that she and her nursing colleagues ‘definitely didn’t have drinks after work’ during the pandemic, adding that ‘we had to remove all clothing and scrub down before heading home so we didn’t pass the virus onto our families’.

She continued: ‘On many of those shifts we didn’t get a break at all. On the Covid wards, we weren’t allowed to mix with the rest of the hospital and so it was water or nothing unless you brought in from home. You weren’t allowed to use communal facilities such as a kettle to prevent spread.’

Speaking to the BBC last week after the Prime Minister Boris Johnson was fined for attending a birthday gathering in June 2020, the Conservative MP for Lichfield compared Mr Johnson’s actions to ‘teachers and nurses’ going ‘back to the staff room’ for ‘a quiet drink after a very, very long shift’.

Mr Fabricant later published a statement claiming two nurses told him that ‘after an exhausting day at work they, too, had had a drink with their work mates’.

He added: ‘They felt it safe as they had not mixed with others and, frankly, I cannot blame them. Those nurses had been working hard for many hours trying to save lives and their quick drink with close work mates could not have spread the disease. I am sure most other nurses and teachers stuck to the letter of the law as did I.’

This comes after the RCN has called on the Government to step in so the NHS and social care no longer have to absorb the cost of staff Covid testing into already ‘tight’ budgets.