Two-thirds of nurses leaving NHS are under 45, research shows 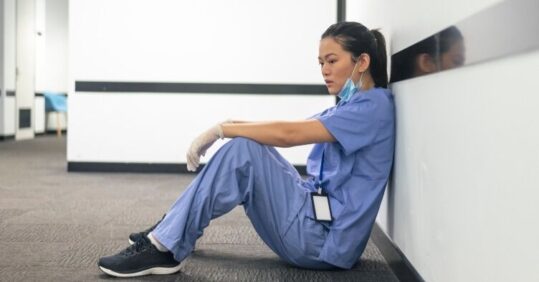 Under 45s now make up two-thirds of nurses leaving the NHS, research from the King’s Fund has shown, amid concerns about the level of burnout and fatigue in the profession.

Analysis of NHS Digital workforce statistics released today revealed that a sharp increase in the number of nursing vacancies in the NHS  may be being driven by a large number of staffing choosing to leave the service before retirement.

This comes after research last week conducted by the Nuffield Trust showed that nurses are leaving the NHS in record numbers, with one in nine nurses leaving their position in the 12 months before June 2022.

The King’s Fund analysis suggests that 34,000 nurses left their role in the NHS over the last 12 months, an increase of 25% on the previous year. Nearly 23,000 of these nurses were under 45 years old, 26% more than in the previous year.

Jonathon Holmes, the report’s author, told Nursing in Practice that trusts were instructed to ‘drastically increase activity levels to work through the backlog’ created during the Covid-19 pandemic. This meant they were ‘hiring more nurses but more jobs were being created’ and ‘the vacancy rate flatlined’, he explained.

‘Through Covid, very few nurses left the NHS, but now they’ve reached the point where Covid has receded and nurses are working under a lot of pressure. There’s a lot of burnout and emotional fatigue. Now I think we’re starting to see the early signs of nurses leaving and its predominantly younger nurses.’

The most recent NHS Staff Survey also reveals that 34% of nurses frequently considered leaving, 52% had felt unwell as a result work related stress and 40% felt burnt out because of their work.

While recruitment is also at a record high, with 44,500 nurses joining the NHS in England this year, Mr Holmes says that these figures suggest that more needs to be done to improve working conditions and retention.

He said: ‘[You] question the efficiency and effectiveness of the Governments recruitment strategy if pressures on the NHS are such that you can spend quite a lot of money and resources training and recruiting nurses, but then the conditions when they arrive their are such that people burnout and retire early.’

Responding to these latest figures, RCN secretary general Pat Cullen said that this ‘exodus from jobs we love, can’t continue’, adding that ‘services are unsafe’.

She continued: ‘This is yet more compelling evidence of the workforce crisis facing patient safety. The last thing anyone needs, when there’s a record of nearly 47,000 unfilled nurse posts in England, is younger nurses leaving shortly after joining the NHS. What is desperately lacking from the UK Government here, as well as a plan, is any sense of urgency.’