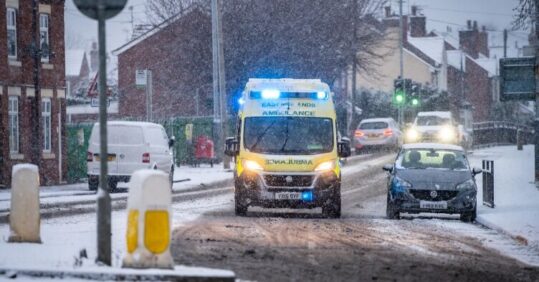 They urged Ms Truss to take action ‘without delay’ in the areas of workforce, social care, capital funding, the impact of the cost of living crisis and inflation, and to strengthen the voice of people living with ill health in decision-making.

Last month, NHS data revealed that the number of nursing vacancies in the NHS workforce had climbed 21% in a single year to a record high of almost 47,000 unfilled roles. Across the whole NHS, there are now 132,000 unfilled full-time posts and, as the open letter points out, ‘this figure doesn’t capture the thousands of vacancies across primary care’.

While letter called for immediate action and a ‘long term, fully funded workforce plan to ensure communities can reliably receive the best possible care in the future’.

In social care, workforce issues are compounded by low pay, leaving 165,00 unfilled roles. ‘Currently,’ say the letter’s authors, ‘one in seven patients in hospital are medically fit to be discharged but cannot be because of the lack of available care packages in the community.

‘Primary care services are increasingly left trying to support patients who have social care needs that cannot be fulfilled. Increasing investment in social care is vital as a matter of urgency to improve flow through the system.’

Independent Care Group chair Mike Padgham said: ‘There will be many social care providers who are exasperated this morning, as we have been saying for so long that support for social care is vital not just for the millions who need that care but also for the proper operation of NHS healthcare.

‘Care and nursing homes are struggling at the moment, with staffing shortages and the rising cost of living coming on top of Covid-19. What we really need is a proper, root and branch reform of social care, backed by meaningful extra funding for the sector so that we can create a sector that properly pays its workforce.’

During her campaign Mrs Truss suggested that she might divert £13bn earmarked for helping the NHS deal with Covid backlogs into social care in order to avoid an NHS winter crisis.

However, it remains unclear whether this policy will come into effect in the foreseeable future.

A Department of Health and Social Care spokesperson said: ‘The health and social care secretary is focused on delivering for patients and has set out her four priorities of A, B, C, D – reducing ambulance delays, busting the Covid backlogs, improving care and increasing the number of doctors and dentists.’

‘We’re investing £39 million extra over the next three years into the NHS and social care – as well as growing the NHS workforce with almost 4,100 more doctors and over 9,600 more nurses working in hospitals compared to last year.’