RCN: Nurses’ lives might have been saved without PPE wastage 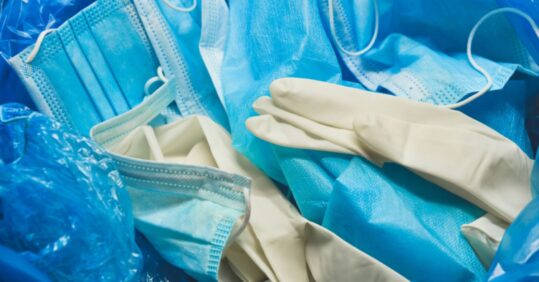 The lives of nursing staff might have been saved if ‘money had been used more wisely’ and ‘decent-quality PPE bought,’ the chair of the RCN has said, on learning the government plans to burn up to £4bn worth of unused PPE.

The Department of Health and Social Care (DHSC) spent more than £12bn on PPE in 2020-21, a report published by the Public Accounts Committee today (June 10) says, but ‘due to the speed of which the procurement took place and the volumes of PPE ordered, equipment was purchased that did not always meet requirements and much higher prices than normal were paid’.

The spending watchdog says £4bn was lost because equipment, such as masks and gowns, did not meet NHS standards, was defective or not needed.

‘The Department has no clear disposal strategy for this excess PPE, but told us that it plans to burn significant volumes and will aim to generate power from this,’ the report says.

The RCN has criticised ‘the shameful waste of public money spent and the environmental impact of disposing of the unusable PPE.’

Pat Cullen, RCN general secretary and chief executive, said members will find this ‘galling,’ adding that ‘it’s a painful reminder of the worst of the pandemic – inadequate or wasteful PPE’.

‘Sending billions of pounds up in smoke when NHS and care services are struggling will be hard for them to comprehend,’ she said.

‘If this money had been used more wisely and decent-quality PPE bought in the first place, then the lives of nursing staff might have been saved.’

The RCN said nursing staff led the UK’s response to the Covid-19 pandemic and were faced with ‘incredibly challenging working conditions on the frontline.’

Ms Cullen said the ‘waste and lack of planning’ is ‘an insult to those who made the ultimate sacrifice.’

The DHSC has told the BBC the committee’s claims are ‘misleading.’ A spokesman said: ‘We make no apology for procuring too much PPE rather than too little, and only 3% of the PPE we procured was unusable in any context.’

The DHSC has also argued that it was better to purchase PPE despite the ‘globally inflated market,’ rather than risk running out of equipment.

The report also refers to a ‘haphazard purchasing strategy’ having resulted in ‘problems with a large number of the PPE contracts it entered into.’

It says: ‘It is currently engaged in commercial negotiations, legal review or mediation in respect of 24% of the PPE contracts awarded.

‘This includes issues with contracts for products that were not fit for purpose, and one contract for 3.5bn gloves where there are allegations of modern slavery against the manufacturer.’

According to the Public Accounts Committee, the accounts show the DHSC spent £1.3bn without HM Treasury approval, and also needed to seek the Treasury’s retrospective approval in many other cases during its response to the pandemic.

The DHSC had a ‘track record for failing to comply with the requirements of managing public money’ before the pandemic, the committee said, which has ‘now been exacerbated further as a result of the Covid-19 response.’

It concluded: ‘The Department must learn from its experience of responding to the Covid-19 pandemic and quickly develop clear post-pandemic plans to transition back to business as usual.

‘This should include implementing a robust procurement and inventory management processes and controls to ensure proper financial management and having a clear coordinated strategy for dealing with the significant volumes of excess PPE in the most cost effective and environmentally-friendly way.’

Ms Cullen added: ‘It will be critical, if we are to truly learn the lessons, for the forthcoming C-19 public inquiry to pin down causes and to say clearly where mistakes were made so they are never repeated.’

During the pandemic, nurses felt under pressure to work without adequate PPE and the RCN hit back at ‘unacceptable’ guidance to reuse PPE due to shortages.