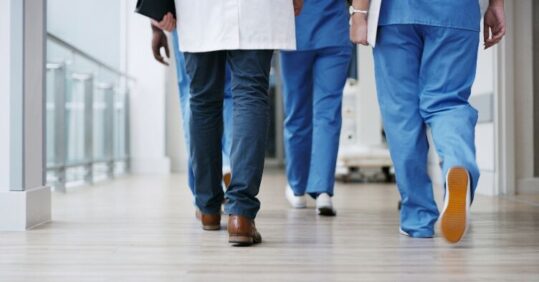 Public support for nursing staff taking industrial action in their fight for fair pay has ‘risen sharply’ in just a few weeks, as nurses wait for a pay award announcement, the RCN has found.

The nursing body’s poll of 1,488 adults in England found 49% of respondents also said they were ‘very’ or ‘quite’ likely to support industrial action, compared to 42% in a similar survey in May.

It called on newly appointed health and social care minister Steve Barclay to announce a ‘significant and restorative’ pay rise before the House of Commons rises for summer recess later on 21 July, ‘amid the prospect of yet another below-inflation pay rise’.

The survey also found that 86% support a pay increase for nursing – with nearly 62% of those favouring an increase of 5% or above, although NHS England warned last week that any rise above 3% will have to come from service cuts.

In addition, it found that 79% of the public said they think there are too few nurses currently working in the NHS in England, and 26% said they are not confident that they or a loved one would receive a good standard of care from the NHS.

The most commonly cited reasons for this lack of confidence are waiting times (62%) and nurse staffing levels (52%), the union revealed.

The UK government was expected to announce the 2022/23 pay award for NHS staff in England in April, but a figure is yet to be disclosed, although NHS England warned last week that a pay rise above 3% will not be possible without either service cuts or further central funding.

‘With frustration growing at the UK Government’s obstinate refusal to acknowledge the full impact of the cost-of-living crisis, a wide cross-section of professions are considering strike action,’ the RCN said. ‘The public mood echoes the mood within the present nursing profession.’

Pat Cullen, the union’s general secretary and chief executive, said nursing staff are ‘leaving the profession in their droves – the incredible financial hardship they face is proving the final straw,’ and she warned that ‘a lack of staff is putting patient care at risk’.

Ms Cullen said: ‘No nurse ever wants to take industrial action, but nothing is off the table for our members. Nursing staff may feel they have no other choice to protect patient safety.

‘The pressure on nursing is unrelenting and now soaring inflation means staff are struggling to pay the bills and going to food banks.

‘After a decade of pay cuts by government, nursing cannot afford to wait any more.  Nursing is a highly-skilled profession and must be recognised as such – investing in the profession must start with fair pay.’

In May, RCN members met with London’s mayor Sadiq Khan for talks about the ‘current nursing workforce crisis’, with the rising cost of living and staff shortages at the forefront of discussions.