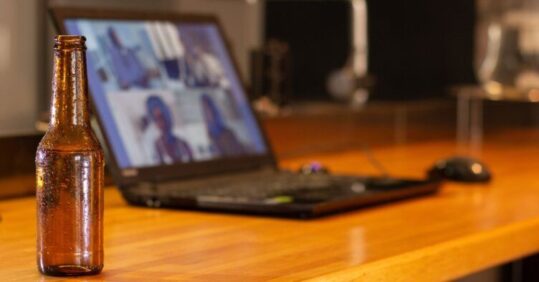 Video call on laptop prepared on a kitchen counter with friends from home with a beer in the foreground. Selective focus. Quarantine concept
Mimi Launder

Michael Fabricant MP has said his claim nurses drank after work during Covid lockdowns only applies to a ‘minority’, who he was ‘neither judging nor chastising’.

In a letter to the RCN, which dubbed his controversial comments earlier this month ‘demoralising and incorrect’, the MP for Lichfield said he had incorrectly given the ‘impression [drinking after work] was general practice by nurses’ when ‘this was never the case’.

He continued: ‘I was neither judging not chastening the minority of nurses and teachers who chose to unwind with a few work colleagues after a long shift… Of course, I am well aware that having a drink after a shift would be against the rules, but I was aware of a number of instances where this had happened, albeit in a minority of cases…

‘And in the small number of cases where people did have a quick drink with close work colleagues, I both understand and sympathise with people who had endured a long and exhausting day.’

He added: ‘My error in one part of the [BBC] programme… was to give the impression [drinking after work] was general practice by nurses and teachers: this was never the case.’

Mr Fabricant also said a ‘little tolerance for everyone who had been a stressful work environment, and then met with close work colleagues after, would be no bad thing’.

This comes after he made the initial claim in an interview with the BBC, where he compared Prime Minister Boris Johnson being fined for attending a birthday gathering in June 2020 to ‘teachers and nurses’ going ‘back to the staff room’ for ‘a quiet drink after a very, very long shift’.

Last week, health minister and registered nurse Maria Caulfield, who returned to nursing during Covid-19 pandemic, refuted his claims that nurses drank at work during lockdowns.

Ms Caulfield said on Twitter that she and her nursing colleagues ‘definitely didn’t have drinks after work’ during the pandemic, adding that ‘we had to remove all clothing and scrub down before heading home so we didn’t pass the virus onto our families’.