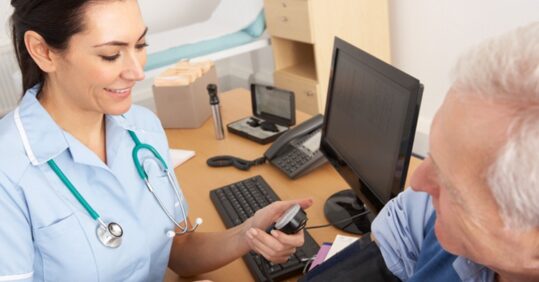 General practice nursing encompasses many different specialist skills within one career. As a GPN, you are likely to be involved in most aspects of patient care, from child immunisation to family planning, education and the management of chronic illness. The NHS Careers website says:

Roles, responsibilities and standards for general practice nursing differ around the country and so will depend on where you are employed. This may seem confusing as you might expect professional standards to be, well, standard. But each area of the country has a different clinical commissioning group (CCG), made up of local general practices, which commissions services based on the needs of its patient population. CCGs themselves will become part of wider Integrated Care Systems (ICSs) over the coming years.

So the varied needs of patient populations and the wide range of duties and responsibilities mean the GPN role is an incredibly diverse one. While there is no overarching guidance for general practice nursing, the Queen’s Nursing Institute has published a set of voluntary standards for nurses who are new to general practice, alongside separate standards for senior GPNs.

General practice nursing is itself a specialty of sorts, requiring advanced-level training. In fact, many GPNs have a masters-level qualification, which underlines the depth of knowledge and skill the job entails.

You must have completed a nursing degree and be registered with the Nursing and Midwifery Council.

Whether you are a newly qualified registered general nurse, or you’ve been working as a nurse in a different setting – in secondary care, for example – you’ll need to undertake extra training when moving into general practice nursing. Again, the exact requirements and options will be different in different areas of the country.

Many of these courses are accessed as standalone diplomas or continuing professional development (CPD) programmes. Often, courses are funded by Health Education England (HEE), or by the employing practice itself.

There are courses run by universities for advanced-level GPN training, but this is something to research once you’ve completed RGN training as the specialist courses are subject to change. Skills for Health has published a core capabilities framework for advanced GPNs.

Currently, NHS England is undertaking work to try to standardise the GPN role across the country, and published a 10-point action plan. However, the exact training and skills you need will vary. Some employers will specifically ask for practice nurses to train in a particular area of work, according to the services that the CCG commissions locally.

Those services are shared between the GPN and the district nurse team in the community, but how the workload is distributed will vary.

The level of training and knowledge required is equivalent to Agenda for Change (AfC) band 6 or 7 in secondary care terms. Unlike secondary care, though, GPN salaries do not automatically fall into bands. Some practices do adopt the AfC pay banding, although nurses on different bands might have the same ‘general practice nurse’ title, for reasons such as seniority and local variations.

The advantage of that approach over a hierarchical nomenclature system is that it values what each nurse can bring to the team. Some practices will have a lead nurse or a nurse manager role, but this does not necessarily mean the postholder has more specialist knowledge than other nurses in the team. It simply means they have the skills to hold a management position.

As with any level of leadership, it is not always the most senior person in a particular role, but rather the one who is best suited to it.

The different avenues available in terms of training and specialism make general practice nursing a career many people stay in until they retire. As with any job in nursing, though, the demands of the role call for certain strengths and personality traits.

Particular skills and strengths required include:

Main benefits of the role

GPNs are not usually employed by the NHS directly, but by the practice they work for. General practices are small businesses commissioned by the NHS; as a business, a practice is able to create its own terms and conditions.

General practice nurses tend to work autonomously and independently most of the time. The work is typically surgery based although some home visits may be involved, for example to take blood samples or administer flu vaccinations. Again, this varies across the country and depends on the district nurse role in each area.

The benefits of working in general practice are:

There are other possibilities within general practice nursing that would offer a higher salary – for example, if you are a GPN with an additional nurse prescriber qualification, you would be able to take on prescribe responsibilities for your patients, within your competence.

There are other roles in primary care nursing such as nurse associate, healthcare support worker and advanced nurse practitioner (ANP). These are different from the GPN role, requiring different skillsets and forming part of the wider primary care nursing team. One does not necessarily progress to another in terms of career hierarchy. Primary care and general practice are continuously evolving to meet the increasing and more complex needs of local populations, and practice nursing has developed accordingly, but so far without set standards.

Unfortunately, nursing broadly – and GP nursing specifically – can still very much be viewed as hierarchical, and many people may believe a particular nursing role is more senior than another.

For example, a newly qualified nurse may decide to train as an advanced nurse practitioner or as a practice nurse, because these are very different jobs.

A practice could employ both a general practice nurse and an advanced nurse practitioner, but one is not necessarily more senior than the other. In each case, the nurse has pursued a different training path after qualifying as a general nurse to get into their preferred area of nursing.

Some practices have a team of GPNs, some of whom might have interests in particular clinical areas. If you have a clinical interest in respiratory care, for example, you might become the lead respiratory nurse.

Primary care networks can offer further opportunities for nurses to work across practices, and to take on more senior responsibilities. At PCN level, senior GPNs can take on the role of director of nursing or clinical director.

As a GPN, you work as part of a wider team but ultimately the ability to make decisions on your own with confidence is what counts. The role is varied, advanced, challenging and most definitely rewarding – and one that many people enjoy for their entire working life.

The RCN hosts a forum for nurses working in general practice that has more than 9,000 members.

Revalidation and how Covid-19 has affected the process

Roles, responsibilities and standards for general practice nursing differ around the country and so will depend on where you are employed.