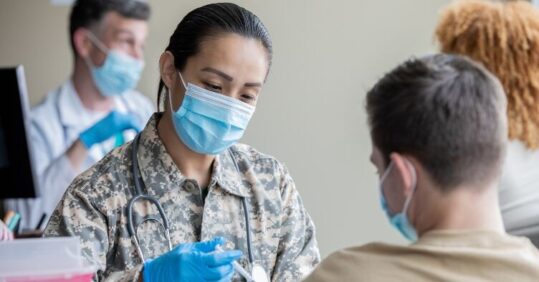 Armed forces personnel could fill frontline NHS workers’ roles in hospitals and driving ambulances under plans being drawn up by winter and health officials to manage strike action this month.

Officials are now putting together contingency plans, according to a report in The Times, that would call on the military to assist the health services under the military aid to the civil authorities protocol (Marca).

Marca allows the army to be called in when a ‘civil authority lacks the capability to fulfil the task and it would be unreasonable or too expensive to expect one to be developed’.

This protocol was last used during the Covid pandemic when the military was called on to help deliver PPE.

Although no formal request for assistance has yet been issued by the Department of Health and Social Care, the Ministry of Defence is reportedly assessing ways that military personnel could assist the NHS if strikes are as wide as NHS leaders fear.

This follows the announcement of RCN strike dates on the 15 and 20 December, while, over the weekend, RCN chief executive Pat Cullen told the Government that it would be ‘negotiations or nothing’. So far, the UK Government has been unwilling to enter into formal pay negotiations with unions.

In Scotland, the RCN, Unison and the Royal College of Midwives have delayed strikes following a fresh pay offer from the Scottish Government.

It is worth noting that even during strike days, the RCN has said critical services will remain open and safe staffing levels maintained through negotiations with employers.

A spokesperson for the DHSC said: ‘We hugely value the hard work of all NHS staff and we are doing what we can to help ease pressures put on the health and care system as result of winter and Covid. We are working with the NHS on a range of options to manage disruption to health and care services during industrial action.

‘Hospitals will do everything they can to ensure patients and the public are kept safe, however planned appointments may need to be cancelled and emergency care prioritised to those in need of urgent care only.’