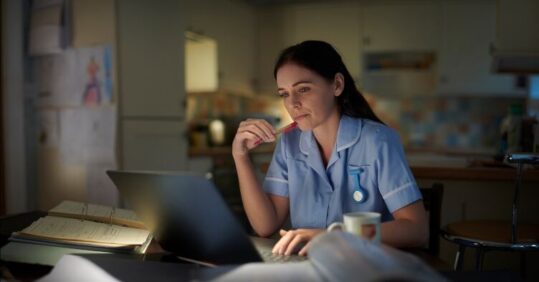 Announcing this year’s iteration of the annual ‘We are the NHS’ recruitment drive, the organisation highlighted the 46,828 unfilled nursing posts ahead of a ‘challenging winter period’ for NHS staff because of the combined impact of flu and Covid.

The campaign will ‘shine a light on the wealth of NHS nursing roles available’ using real patient stories and how nurses helped them to recover, with adverts played across TV, on-demand services, radio, and in cinemas, it added.

However, although the RCN has welcomed the recognition of the NHS workforce crisis, it argued it will only be solved if nurses are paid a ‘fair salary’.

RCN director for England, Patricia Marquis, said: ‘This campaign highlights what an incredible job nursing is – and the incredible people who do it. It’s one of the most brilliant and rewarding careers that someone can do, and our patients see every day how much nurses care.

Low pay, Covid pressures, and poor work-life balance have led to nurses leaving the NHS at record rates with two-thirds of those leavers now under 45. This has raised concerns over the quality of service that can be provided with such low staffing levels.

However, nurse recruitment is also at the highest rate it has ever been with 44,500 new nurses joining NHSE in the last 12 months.

The RCN has been arguing for a pay rise for nurses of 5% above inflation, which it claimed last week would be a cheaper option than hiring agency staff – although Nursing in Practice has highlighted some potential limitations to its calculations.

Ruth May, chief nursing officer for England, said: ‘Nursing is a life-changing profession where no two days are ever the same, and I would encourage anyone with a passion for making a difference to people’s lives to consider a career as a nurse.

‘As we approach the winter months and NHS services gear up to manage higher demand, it’s clear the difference that nurses make to the health service every day, and I urge anyone considering a career where they want to really make a difference to find out more.’