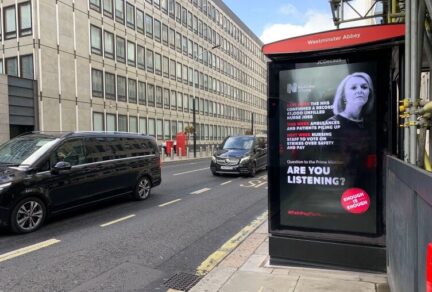 The RCN has began a national campaign demanding change from new Prime Minster Liz Truss as the ballot on industrial action draws closer.

To coincide with Ms Truss’ first full day in office taking over from Boris Johnson, the RCN will be displaying posters on bus stops, Underground stations, and billboards in the Westminster area, which pose questions from nursing staff to the new PM.

One poster in this new campaign features Ms Truss’ own campaign admission that ‘hospitals are falling apart’ and asks the Prime Minister, ‘What’s your plan?’

In the rest of the UK, thousands of posters will display separate messages focusing on the impact of the cost of living crisis on NHS staff. One poster says, ‘A cost of living crisis and a decade of pay cuts has pushed nursing staff to use foodbanks and even sleep in their cars. We demand change.’

This comes as the RCN prepares to ballot 300,000 members on Agenda for Change contracts across the UK on whether to take industrial action over pay from 15 September.

Currently, the NHS is facing almost 47,000 vacancies for nursing roles in the NHS, an enormous elective care backlog and a challenging winter ahead.

Last month, NHS leaders warned that rising fuel prices could force one in ten community care staff to leave the industry as they can no longer afford to drive to visit patients.

Community care leaders were also concerned that they may not be able to deliver all their normal patient services due to staff shortages.

RCN general secretary and chief executive Pat Cullen said: ‘From her first moment at the Despatch Box, the new Prime Minister can demonstrate she is listening to the concerns of nursing staff. The toughest questions facing Liz Truss will come from our members and millions of health and care workers like them. They are struggling – at home and work – like never before. And deserve serious answers, not brushing aside.

‘MPs travelling to Westminster today will know what nursing staff expect them to ask. Until the new Prime Minister puts forward a fair and adequate proposal, I will continue asking nursing staff to take strike action.’