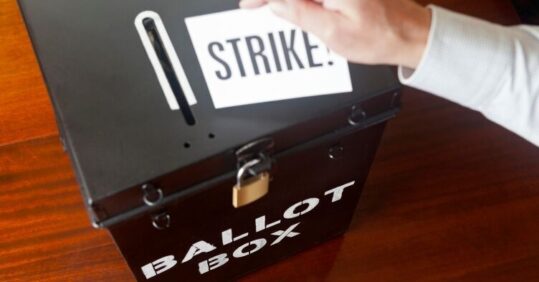 Nursing staff in Northern Ireland will join nursing colleagues across the UK as the RCN ballots members on strike action.

In July, Northern Ireland’s health minister Robin Swann said that he intended to accept the recommendations of the NHS Pay Review Body to uplift the full-time equivalent salaries of all Agenda for Change staff by at least £1,400 for 2022-23.

That is equivalent to a pay rise of around 9% for the lowest earners, but for middle earners will be around 4%. However, Mr Swann said he would be unable to implement the pay offer immediately, as Northern Ireland still has not agreed an executive budget.

The ballot will ask RCN members working on Agenda for Change contracts if they will take strike action, which involves a complete withdrawal of labour.

However, nurses in Northern Ireland previously walked out over staffing and pay in late 2019 and early 2020, which represented strike action for the first time in the College’s 103-year history, before they voted to accept staffing and pay parity proposals in February 2020 and stopped striking.

Rita Devlin, director of the RCN Northern Ireland, called it ‘unbelievable’ that the College is once again asking members if they will strike three years after it took industrial action for the first time ever.

She continued: ‘Serious shortages of nursing staff are putting patient safety at risk. Governments across the UK have failed to take action on this issue and in Northern Ireland, with no functioning Northern Ireland Executive to appeal to, nursing staff have not received a pay offer at all.’

At least 50% of eligible members must vote in the ballot, with the majority voting in favour, for strike action to be legal.

In England and Scotland, there are further thresholds that would need to be met on top of this one for strike action to be legal.

Since nurses are workers whose role involves the delivery of ‘important public services’, there is an additional requirement that 40% of the total number of eligible voters must approve the industrial action for the ballot to pass in these countries.

This means that if there were 100 nurses, 50 must turn out and vote and at least 40 must vote in favour. If 50 turned out to vote and 39 voted in favour, industrial action would not be lawful even though a majority of those who voted supported it.

Pat Cullen, RCN chief executive, said: ‘There’s never been a more urgent time to fight for fair pay and patient safety. From severe staff shortages to a decade of underpayment, we can’t continue like this.

‘Nursing staff will stop at nothing to protect their patients. Staff shortages are putting patient safety at risk and the failure of governments across the UK to listen has left us with no choice but to advocate for strike action.’

In August, the public services union Unison announced that it will ballot 50,000 NHS employees in Scotland on whether to take industrial action after members rejected the Government’s pay offer.