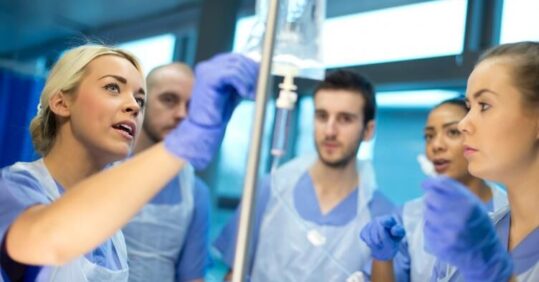 Labour intends to significantly increase training places for nurses and doctors, which would be funded by reinstating the top 45% rate of income tax, Shadow Chancellor Rachel Reeves has announced.

Speaking today at the Labour Party conference in Liverpool, Ms Reeves said the party plans to double the number of district nurses qualifying from 700 to 1,400 each year, train 5,000 new health visitors over five years, and create an additional 10,000 nursing and midwifery placements every year, if it wins the next general election.

This would be funded through an estimated £2bn raised from reversing the Government’s plan to scrap the 45% rate of income tax for earnings over £150,000, announced this Friday, she explained.

Labour also promised to produce a long-term workforce plan for the NHS for the next five, ten and fifteen years.

It would also create a new independent body with duties including undertaking workforce projections and plans; creating new types of health and care professionals; and creating new career paths into the NHS and social care, as well as reviewing existing ones.

Ms Reeves said: ‘The next Labour government will double the number of district nurses qualifying every year… We will train more than 5,000 new health visitors. We will create an additional 10,000 nursing and midwife placements every year.

‘More than that: We will implement the biggest expansion of medical school places in British history doubling the number of medical students so our NHS has doctors it needs…

‘Strong public services are the foundation of a strong society. We owe everything to those who work in our National Health Service. But we also know, that our health service today is on its knees. It is a social priority. And it is an economic priority.’

Labour said it the cost of the package of nurses training and medical places peaks at £1.3bn for England, rising to £1.6bn when cost is matched for Scotland, Northern Ireland and Wales.

This comes after the health secretary Thérèse Coffey announced the Government’s plan to tackle the NHS, in which issues of staff vacancies, training, and the nursing workforce were largely ignored. Ms Coffey promised to ‘free up’ funds for general practices to hire more advanced nurse practitioners and pay care homes to take hospital patients.

Meanwhile, the number of health visitors have decreased, and a 2021 paper from University College London estimated that there is a shortfall of 5,000 health visitors in England.

District nurse numbers are also falling, with the latest NHS data showing 4,086 full-time equivalents in April 2022, down from 6,362 a decade before.

However, simply increasing the number of available places is not guaranteed to increase the number of nurses, with the latest UCAS data showing that over 700 funded university places to study nursing and midwifery were left unfilled in Scotland.

At the time, Eileen McKenna, associate director for nursing, policy and professional practice at the RCN, said the Government must do more to make nursing an ‘attractive and rewarding career’ in order to ensure a stable workforce for the future.