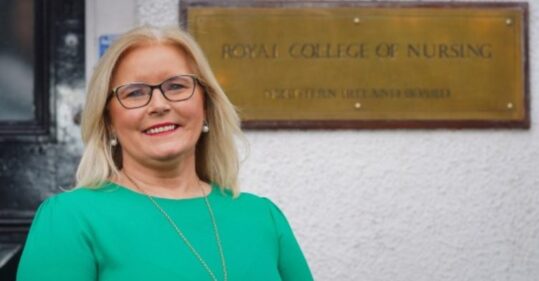 The RCN has confirmed Pat Cullen as interim general secretary and chief executive after she took on the role in an acting capacity in April.

The appointment comes after Dame Donna Kinnair stepped down from the role earlier this month after two years following a period of ill health.

Ms Cullen, who has worked at the RCN since 2016, was previously director of RCN Northern Ireland where she oversaw industrial action for the first time in the college’s history.

She said: ‘It is a privilege to continue in this role during such a critical time for nursing. I am passionate about representing RCN members and will do everything in my power to make sure the voices of nursing staff are heard loudly and clearly.’

Ms Cullen will ensure a ‘strong and consistent voice for RCN members’ during the Government’s upcoming Covid-19 inquiry, which will start next spring, the RCN said.

It added: ‘The inquiry will be a landmark event, where the experiences of nursing staff must be heard, while the Fair Pay For Nursing and Safe Staffing campaigns are top priorities for RCN members and crucial to the future of the profession.’

The RCN is among health unions waiting for ministers to make the final decision on pay for NHS workers in England, after the NHS Pay Review Body submitted its recommendations last month. The Government suggested a 1% pay rise in March this year, while the RCN has been campaigning for a 12.5% uplift.

The appointment also follows a flurry of resignations from the RCN.

Earlier this month, RCN Council chair Dave Dawes was temporarily suspended from the council and his seat in the North West region, following complaints about his conduct.

Also this month, Queen’s nurse Dr Joan Myers stepped down from her role as RCN Council member for London after saying on Twitter that she did not feel ‘welcomed’.

In November last year, RCN deputy president Yvonne Coghill announced her resignation, saying she had ‘no choice’ but to step down from her post.