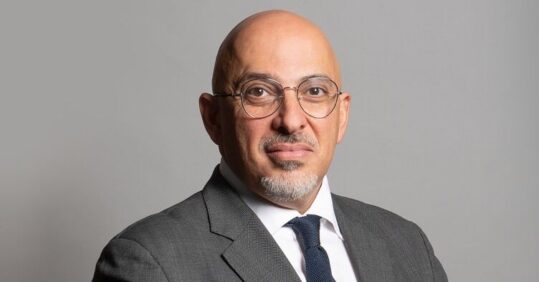 Mr Zahawi, speaking on Sky News on Sunday, urged nurses not to strike and to ‘send a very clear message’ to Mr Putin that he cannot use energy prices as a weapon against Ukraine’s allies during his illegal invasion of Ukraine.

He said that nurses should ‘reflect on this because that is exactly what Putin wants to see – that division.’ He added: ‘Let’s not divide, let’s come together.’

Mr Zahawi told interviewer Sophy Ridge: ‘We have to come together, this is not a time to be divided to. I hope to send a very clear message to Mr Putin that he can’t use energy as a weapon in this way and we will remain united, which is why we’ve accepted the pay review bodies of the NHS and on schools.’

The attempt to justify real-terms public sector pay cuts by linking health unions’ pay demands to Mr Putin’s weaponisation of fuel costs was met with a wave of incredulity and criticism.

Pat Cullen, RCN general secretary, said that the minister’s comments were a ‘new low for this Government’.

Unite general secretary, Sharon Graham, also denounced Mr Zahawi for attacking ‘ordinary workers whose only crime has been to refuse to take a pay cut’.

She continued: ‘Nadhim Zahawi’s allegation that Britain’s nurses, ambulance drivers and teachers are allies of Vladimir Putin is as ridiculous as it is disgraceful.

‘Rather than running down our NHS in an act  of catastrophic self-harm and threatening to bring in the military, the minister should instead ask himself why health staff are leaving in droves.

‘The truth is, if pay and conditions are not dramatically improved, no army will be big enough to cover the vacancies never mind strikes.’

In the interview, Nadhim Zahawi also warned that seeking higher pay could ‘inflation for longer and hurt the most vulnerable’, adding: ‘Our message to the unions is to say, ‘this is not a time to strike, this is time to try and negotiate’.’

However, the RCN has previously said that the UK Government has not taken up its offer of formal pay negotiations.

Mr Zahawi also said that the Government was putting contingency plans in place to minimise the impact of strikes over the Christmas period.

He explained: ‘It is the right and responsible thing to do to have contingency plans in place…We are looking at the military, we are looking at a specialist response force which we have actually set up a number of years ago.’

This comes after it emerged last week that armed forces personnel could fill frontline NHS workers’ roles in hospitals and driving ambulances under plans being drawn up by winter and health officials to manage strike action this month.

The RCN has announced strike action on 15 and 20 December if the Government refuses to visit the pay offer of under 4% on average made in July.